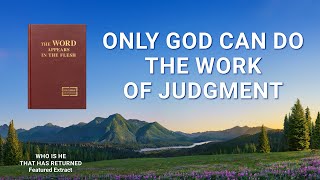 No One Else Can Do God’s Work of Judgment 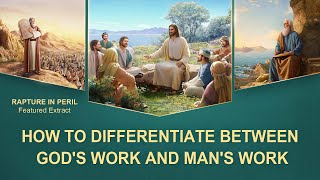 How to Differentiate Between God's Work and Man's Work 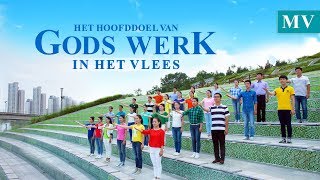 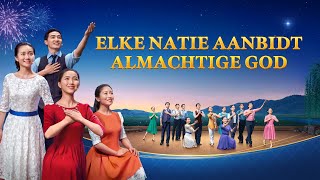 Wat is geloof in God precies?

Qs&As About the Truth

Question: Almighty God has become flesh and descended to the earth, so are the words in the Lord’s Prayer “Your kingdom come, Your will be done in earth, as it is in heaven” fulfilled by the work of Almighty God? Is the prophecy in the Book of Revelation, “the tabernacle of God is with men,” related to Almighty God coming into the world? Is there a more profound significance to God becoming flesh in the last days?

Antwoord: God’s sheep truly listen to the voice of God! These questions you’re bringing up are the main concerns for most people. Since God has already come, all of His promises will be fulfilled. The coming of Almighty God began the Age of Kingdom and entirely ended the old age. Almighty God came in secret to do His work of judgment and chastisement, and has already made a group of overcomers before the catastrophe. His great work has been accomplished, and soon He will send down the great catastrophe and openly appear to all nations and all peoples. This proves that Almighty God has gained His kingdom and has come down to earth. The Lord Jesus taught people in the Lord’s Prayer: “Our Father which are in heaven, Hallowed be your name. Your kingdom come, Your will be done in earth, as it is in heaven. Give us this day our daily bread. And forgive us our debts, as we forgive our debtors. And lead us not into temptation, but deliver us from evil: For your is the kingdom, and the power, and the glory, for ever. Amen” (Mat 6:9-13). These words have already begun to be fulfilled, allowing people to see that God’s tabernacle is on earth. The group of overcomers that God has made are those who will rule as kings alongside God in the Millennial Kingdom, and they will be the pillars in the kingdom. This fulfills this prophecy from the Book of Revelation: “Him that overcomes will I make a pillar in the temple of my God, and he shall go no more out: and I will write on him the name of my God, and the name of the city of my God, which is new Jerusalem, which comes down out of heaven from my God: and I will write on him my new name” (Rev 3:12). God has obtained a group of those who are of the same heart and mind as Him, and this shows that His kingdom has already come to earth, and it indicates that He has already fully triumphed over all of Satan’s evil forces, Christ’s kingdom has already appeared on earth, and God’s will has been fully carried out within Christ’s kingdom, just as in heaven. In the kingdom of Christ, the people of God are currently undergoing all kinds of trials, and all those who can stand and bear witness are the people of the kingdom of heaven, and all of the evil ones, the evil spirits, the cowards, and the licentious ones have been revealed and eliminated. This shows that the kingdom of Christ has already appeared, and God’s great work has been accomplished! None of Satan’s forces can disrupt or destroy the reality of what God has achieved. Let’s take a look at a couple of passages from Almighty God’s words.

“When the nations and the peoples of the world all return before My throne, I will thereupon take all the bounty of heaven and confer it upon the human world, so that, thanks to Me, it will brim with matchless bounty. But so long as the old world continues to exist, I will hurl forth My rage upon its nations, openly promulgating My administrative decrees throughout the universe, and visit chastisement on whomever violates them:

As I turn My face to the universe to speak, all mankind hears My voice, and thereupon sees all the works I have wrought throughout the universe. Those who go contrary to My will, that is to say, who oppose Me with the deeds of man, will fall down under My chastisement. I will take the multitudinous stars in the heavens and make them anew, and thanks to Me the sun and the moon will be renewed—the skies will no longer be as they were; the myriad things on the earth will be renewed. All will become complete through My words. The many nations within the universe will be partitioned afresh and replaced by My nation, so that the nations upon the earth will disappear forever and become a nation that worships Me; all the nations of the earth will be destroyed, and will cease to exist. Of the human beings within the universe, all those belonging to the devil will be exterminated; all who worship Satan will be laid low by My burning fire—that is, except for those now within the stream, the rest will be turned to ashes. When I chastise the many peoples, those in the religious world will, in differing degrees, return to My kingdom, conquered by My works, because they will have seen the advent of the Holy One riding on a white cloud. All of humanity will follow their own kind, and will receive chastisements varying with what they have done. Those who have stood against Me will all perish; as for those whose deeds on the earth have not involved Me, they will, because of how they have acquitted themselves, continue to exist on the earth under the governance of My sons and My people. I will reveal Myself to the myriad peoples and the myriad nations, sounding forth with My own voice upon the earth to proclaim the completion of My great work for all mankind to see with their own eyes” (“The Twenty-sixth Utterance” of God’s Utterances to the Entire Universe ).

The fact of God gaining the kingdom and coming down to earth has been laid out in front of us. Almighty God’s words accomplish everything, and they have revealed His authority and power. That we are able to understand the voice of God and see His appearance is His particular grace. God becoming flesh and working among people is not only to save mankind, but it has even more profound significance. A prophecy in the Book of Revelation states: “Behold, the tabernacle of God is with men, and he will dwell with them, and they shall be his people, and God himself shall be with them, and be their God. And God shall wipe away all tears from their eyes; and there shall be no more death, neither sorrow, nor crying, neither shall there be any more pain: for the former things are passed away” (Rev 21:3-4). The tabernacle of God is with men, that is, God incarnate is among mankind, and He lives alongside and dwells with men. He utters words to purify and save mankind, and people have all seen God face-to-face through the words expressed by God in the flesh. They have seen His inherent disposition, what He has and is, and His holy essence. They have enjoyed His mercy and love and have tasted His righteous, majestic disposition that does not tolerate mankind’s offenses. Through knowing God, people have been thoroughly purified and have become those who obey and worship God. This is the more profound significance of God becoming flesh and doing the work of judgment in the last days. God has obtained a group of people who understand Him, obey Him, and are of the same heart and mind as Him. The people in this group are able to understand His words, be His companions, and be those most intimate with Him. They will always be at God’s side, and this is the realization of God’s initial wishes for creating mankind. God will personally appear among His people, and lead the survivors of mankind to live on earth, He will live alongside them, dwell with them, and rejoice with them. Mankind will also enjoy a beautiful and happy life of being with God. This is what God incarnate will achieve in the last days, and it is the greatest promise and blessing that God gives to man.